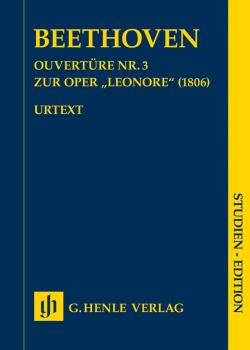 For his only opera Leonore/Fidelio, Beethoven wrote four overtures in total. Chronologically, the so-called Leonore Overture no. 3 is the second of the series and perhaps the most performed of all Beethoven's overtures. During his own lifetime, it was heard not only in the theatre, but also in concert, thereby establishing with the Coriolan and Egmont overtures the new genre of the concert overture. Recognized around the middle of the nineteenth century as a masterpiece, it went on to become the “declared favorite of all orchestras,” as Beethoven biographer Anton Schindler testifies. It now appears as a study score based on the musical text of the Beethoven Complete Edition, with its own specially prepared foreword.