Beyond The White Hand: Construction with Guitar Player Including Guita New 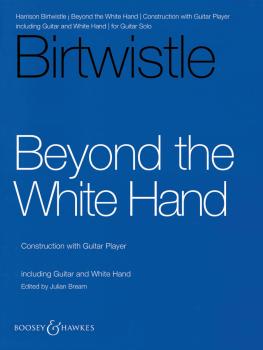 Beyond the White Hand: Construction with Guitar Player, was commissioned by the Julian Bream Trust and first performed at St John's Smith Square by Andrey Lebedev in 2014.

This substantial addition to the advanced solo guitar repertoire reflects and expands upon an earlier miniature from 2007: Guitar and White Hand, Birtwistles first piece for the instrument. Both pieces draw artistic inspiration from the artist Pablo Picasso: the smaller piece written for Forbes Henderson and sharing a title with the 1927 painting of the same name. The larger piece was composed in the centenary year of Picasso's Construction with Guitar Player after which the piece is named and the sculpture Guitar.Picasso made about a dozen 'sculptural' constructions during 1912-1914, many of which employ recycled or carved elements. A good number of these were destroyed and only one, Still Life was shown publically during his lifetime. Picasso's own Construction with Guitar Player was an installation of a partially drawn and painted figure to which he added arms made of newspaper that fold away from the wall to embrace a real guitar. In the foreground stands a table with a bottle of wine and this was photographed by Picassoin his studio in 1913.

Musically, Birtwistles Construction is a large scale, dense work of sixteen minutes duration. It does not develop linearly, but presents fragments of detail, interruptions, digressions and loops as a “deconstructed guitar” in sound.